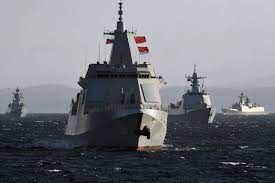 Russia and China have begun a joint naval exercise in the East China Sea.