Review Of The Progress Of Rehabilitation Of Kashmiri Migrants: 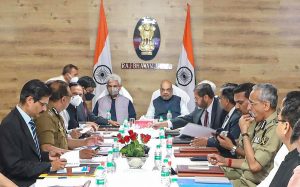 Union Home Minister Amit Shah reviewed the progress of rehabilitation of Kashmiri migrants, including Kashmiri Pandits, during a meeting with Jammu and Kashmir Lieutenant-Governor Manoj Sinha in Jammu.