What Is Extinction Rebellion? 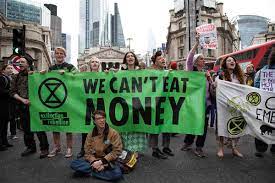 World over activists of Extinction Rebellion are staging protests in various formats.