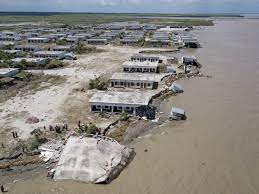 A study has projected that sea levels will rise around Lakshadweep Islands due to the impact of global warming.