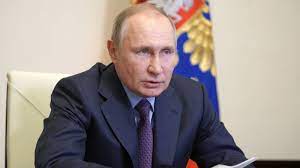 Russian President Vladimir Putin signed the legislation that may be able to keep him in power until 2036, when he will be 83 years old.