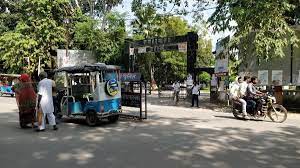 Saharsa became the first district in Bihar to be declared paperless (e-office) with an aim to end the Great Indian Red Tape.