Second Edition Of The State Of Finance For Nature Report: 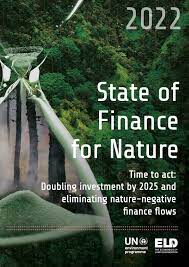 The second edition of the State of Finance for Nature report was released.