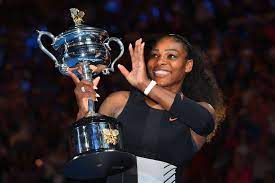 American tennis legend Serena Williams, the winner of 23 Grand Slam titles, has announced that she will retire from professional tennis.