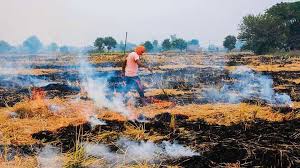 A study was conducted recently in six villages of Patiala, Punjab on Stubble Burning and impacts on health.