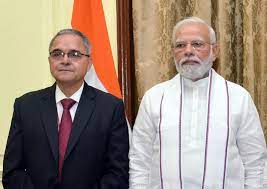 The Government appointed Suresh N Patel as the new chief of the Central Vigilance Commission.