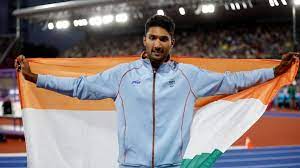 Tejaswin clinched bronze after he cleared 2.22m in his first try.