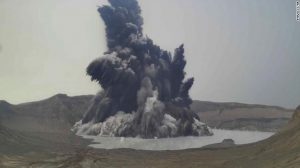 The Philippines increased the alert level on Taal Volcano to level 3 on a five-level scale after a Phreatomagmatic Eruption (PE) occurred that generated a dark grayish plume, one kilometer high.