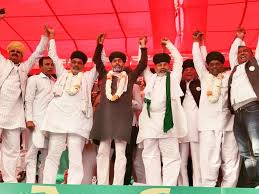 As part of the ongoing farmers’ protest, the Samyukta Kisan Morcha (SKM) is celebrating February 23 as ‘Pagri Sambhal Diwas’, where it has asked supporters across the globe to wear a green pagri/dupatta and post their pictures on social media, with the hashtag ‘Go green for farmers’.