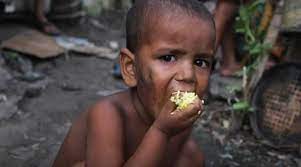 The Ministry of Women and Child Development has released targets to Curb Malnutrition in India.

Findings of the NFHS-5: