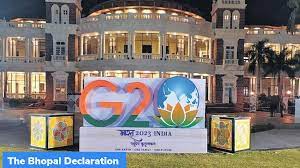 The Bhopal Declaration was released after a two-day meeting of Think-20 under G20 in Bhopal, Madhya Pradesh. The Declaration was made by more than 300 intellectuals from India and abroad