The National Conference On Agriculture For Kharif Campaign 2022-23 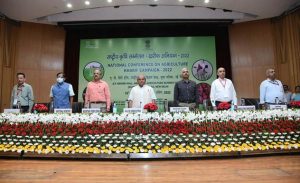 The National Conference on Agriculture for Kharif Campaign 2022-23 has been inaugurated by Union Agriculture Minister, Narendra Singh Tomar at the NASC Complex, New Delhi. As per the 2nd Advance Estimates (2021-22), the country’s total production of foodgrains is estimated at 3160 lakh tonnes which is an all-time record.