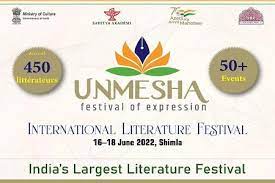 The Ministry of Culture and Sahitya Akademi are organizing Unmesha, an International Literature Festival in Shimla as part of Azadi ka Amrit Mahotsav celebrations, with the support of the Department of Art and Culture, Government of Himachal Pradesh.