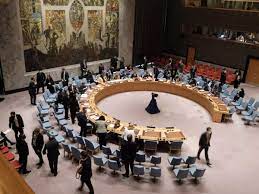 The UNSC’s counter-terrorism meeting will be hosted in Mumbai and Delhi on 28 and 29 October, respectively.