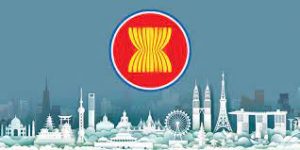 China hosted a meeting of foreign ministers from the 10 Association of Southeast Asian Nations (ASEAN) countries.