What Is A Sea Snot? 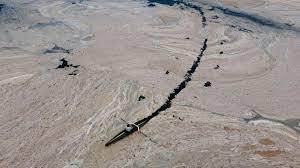 The sea snot that dominated the landlocked Marmara Sea earlier this year is nowhere to be seen on the surface nowadays, but its fallout appears to be bigger than experts initially hoped.

Turkey’s Sea of Marmara, that connects the Black Sea to the Aegean Sea, has witnessed the largest outbreak of ‘sea snot’. The sludge has also been spotted in the adjoining Black and Aegean seas.