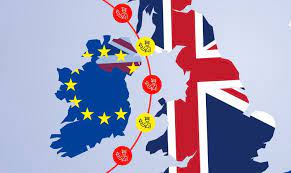 Britain and the EU are locked in an escalating diplomatic feud over Northern Ireland, the only part of the U.K. that borders the 27-nation bloc. The EU says Britain must fully implement the agreement, known as the Northern Ireland Protocol, that the two sides agreed and ratified.