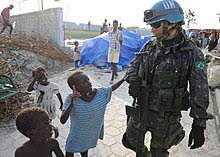 Many women soldiers were training to be a part of a United Nations Peacekeeping mission.