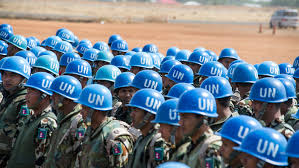 The United Nations peacekeeping chief Jean-Pierre Lacroix is undertaking a visit to India, among the largest troop contributing countries for its operations.