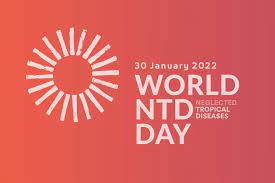 Neglected tropical disease day is observed every year on 30th January. It was declared in the 74th World Health Assembly (2021).