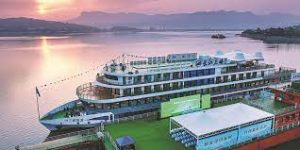 The largest electric cruise ship in the world has returned back to port in Yichang in central Hubei province, China after traveling up and down the Yangtze River for its maiden voyage.