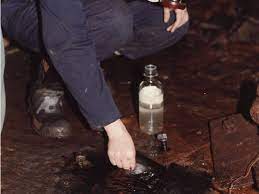 World’s Oldest Water Found in Canada Sheds Light on the Beginning of Life.