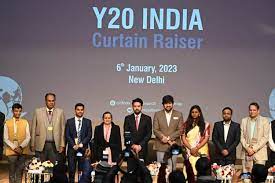 Youth Affairs and Sports Minister Anurag Singh Thakur  launched the themes of the Y20 summit, logo, and website in New Delhi on January 6 in the curtain raiser event of Y20 Summit India.