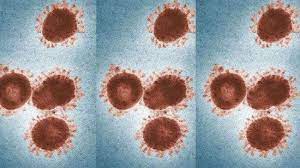 European researchers have raised concerns of yet another pandemic after resurrecting a 48,500-year-old ‘Zombie Virus’ from a frozen lake in Russia.