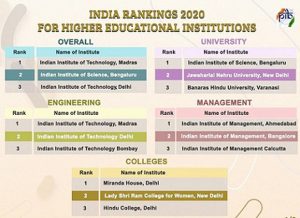 Union HRD Minister released “India Rankings 2020” for Higher Educational Institutions in various categories on the basis of their performance on five broad categories of parameters.

List of institutes which secured top rank in ‘India Rankings 2020’ in various categories:

The Supreme Court has said it was “totally impermissible” for the Department of Telecommunications (DoT) to “misuse” a judgment of the Apex Court to demand ₹4 lakh crore in adjusted gross revenue (AGR) from public sector undertakings. 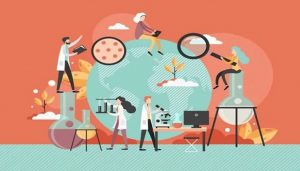 In the recently-released Nature Index table 2020, India is placed twelfth globally in science research output. The top five positions have gone to the United States of America, China, Germany, the United Kingdom, and Japan. 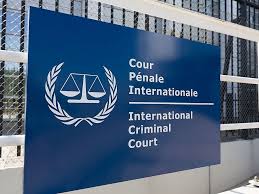 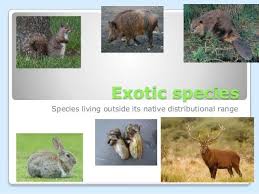 Union Government has issued advisory to streamline the process for import and possession of exotic live species in India. 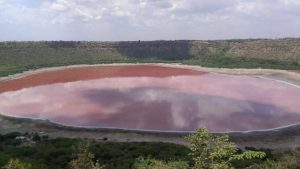 Recently, the water in the Lonar lake in the Buldhana district of Maharashtra was found to be turning reddish over the past few days.

1. The World Day Against Child Labour (WDACL) is being observed on 12 June under the theme “COVID-19: Protect children from child labor, now more than ever”, focussing on the impact of coronavirus crisis on child labor.

2. The first population estimation exercise of the Indian Gaur (Bison) was carried out in the Nilgiris Forest Division, Tamil Nadu.

3. An integrated flood warning system – known as IFLOWS-Mumbai was launched making Mumbai the second city in India after Chennai to have such a system.

5. Siddeque Ali has become the last declared foreigner to be released from the only detention centre in Barak Valley in Assam as the beneficiary of a Supreme Court order.

7. Scientists from Raman Research Institute (RRI), an autonomous institute under the Department of Science &Technology have found out that spectrin, which are flexible rod-shaped molecules present in axons, act as ‘shock absorbers’ to protect axons from stretch-induced damage.

8. According to a new study by researchers, a new concern of injuries in placentas has emerged around pregnant women who have Covid-19. In 16 women who had tested positive for Covid-19 while pregnant, tests conducted immediately after birth found their placentas had evidence of injury.