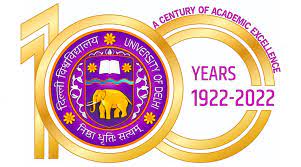 On May 1, 2022 Delhi University marked the beginning of its centennial celebrations.