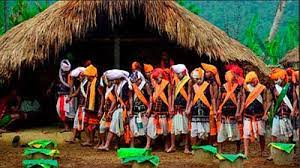 Almost 250 members of two extremist organisations in Assam laid down their arms before Chief Minister Himanta Biswa Sarma at a formal programme in Guwahati.