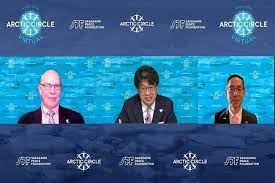 Information regarding India’s participation in the 3rd Arctic Science Ministerial (ASM3) was recently given in Parliament by the Government.