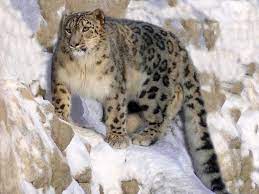 Snow Leopard is found in the mountainous regions of central and southern Asia.