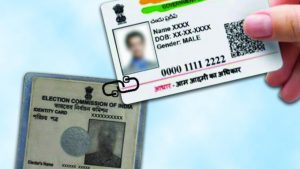 The Election Commission (EC) started a campaign to promote the linkage of Voter ID and Aadhaar.