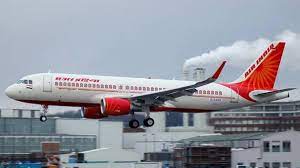 The Union government has transferred its shares in Air India, along with control and management, to Tata Sons subsidiary, Talace, ending a disinvestment process that started five years ago.