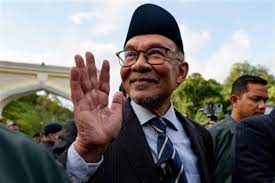 Anwar Ibrahim was appointed as the 10th Prime Minister of Malaysia by King Sultan Abdullah.