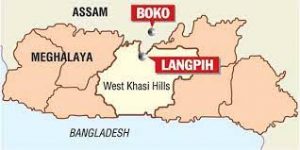 Assam and Meghalaya have partially resolved a 50-year-old border dispute in six of the 12 sectors along their 885-km boundary.