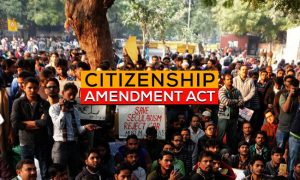 The government has been granted time till April 9 by Lok Sabha and July 9 by Rajya Sabha to frame rules under the citizenship law.