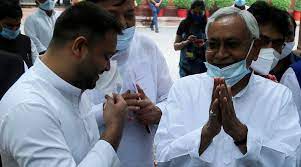 A multi-party meeting held in Bihar unanimously decided to start the caste-based census very soon after the proposal is placed in the Cabinet.