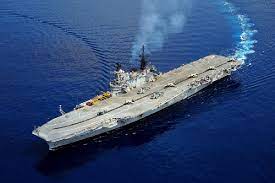 INS Viraat, the Navy’s decommissioned aircraft carrier, has become the “private property” of a ship-breaker who has already torn down 40% of its body, chiefly for scrap, the Supreme Court told a private company, that wants to turn the vessel into a maritime museum-cum-adventure center.