What Is Leopard 2 tank? 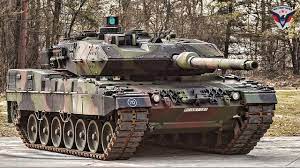 Germany is under pressure to authorize sending Leopard 2 tanks to Ukraine from other European nations.