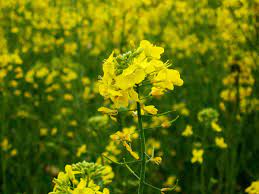 The Genetically Modified (GM) mustard Dhara Mustard Hybrid (DMH-11) was tested in the field and shown to be more productive.