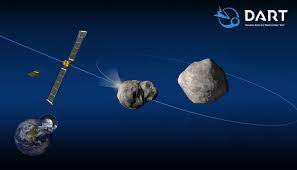 The National Aeronautics and Space Administration (NASA) is about to launch its Double Asteroid Redirection Test (DART) mission.