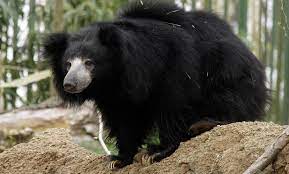 Two sloth bears were rescued by forest officials from a village in Jharkhand by the People for Animals group.