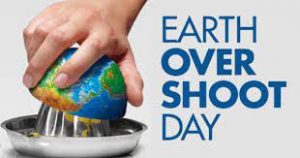 According to the World Wide Fund for Nature (WWF), humanity has again used up all biological resources that our planet regenerates during the entire year by 29th July, 2021.