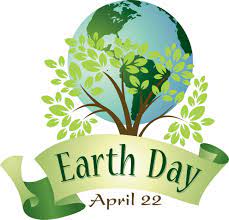 Every year, 22nd April is celebrated as Earth Day to raise public awareness about the environment and inspire people to save and protect it.