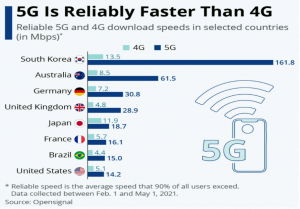 The Department of Telecommunications (DoT) said that Gurugram, Bengaluru, Kolkata, Mumbai, Chandigarh, Delhi, Jamnagar, Ahmadabad, Chennai, Hyderabad, Lucknow, Pune, and Gandhi Nagar would be among the first cities to get 5G services in 2022.