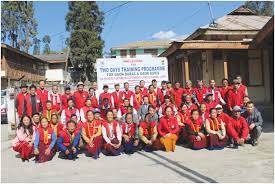 The Assam Cabinet announced that Gaon Buras, village-level functionaries of the district administration, will be called ‘Gaon Pradhans’.