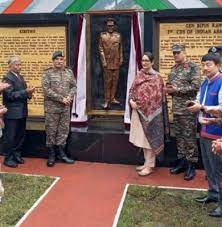 The military camp at Kibithu, which is very close to the Line of Actual Control (LAC) in Arunachal Pradesh, has been renamed “General Bipin Rawat military garrison” in honour of the country’s first Chief of Defence Staff (CDS), who was killed in a chopper crash last December.