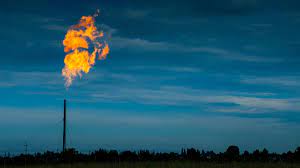 The Global Methane Pledge was launched at the UN COP26 climate conference in Glasgow.

About the Global Methane Pledge: